It was the exciting part of the movie when my son came into the living-room asking where the screwdriver was.  The tool box is pretty organised so I hardly looked up from my movie.  Yet a few minutes it really sunk in

I need to work on my cell phone, where is the screwdriver set”

I wandered into the kitchen to see what exactly he was up to.  It was a shock to see that the back of his phone was off and most of the screws were already taken out – he is nothing if not industrious.

I don’t think I even raised my voice when I asked what in the heck he was doing.  Just a quick bit of background.  I am about the farthest thing from a certified technician of cell phones and neither is my 13 year old son.

Well, if you have an audio headset plugged into your phone and it falls the wrong way part of the audio jack will break off in the device.  This has the negative problem with the music going to the output jack or in this case nowhere, but it has the other side effect of having all other music, noise, notifications and alarms going nowhere too.

After I caught my breath I thought about my boy’s approach.  It actually didn’t sound all that different from what I might try but I thought I would take a quick peek on youtube.  I needed to know how much is involved with the dissassembly of a smart phone.

Yup, between the many tiny flat cables and prying with various tools that I didn’t have it looked to be a nightmare.

Well, if youtube can scare your pants off then perhaps it can also give you some good ideas.  I am slightly paraphrasing but the solution is to stick a stick with glue into the audio jack plugin.

This was the best sounding option of the various choices.  The idea was to put a bit of glue inside the ink tube of a bic pen and push that hard into the audio plugin.

The instructions are easy it just requires you get the amount of super glue right.  I didn’t think that I had the right amount so I stood the phone up so the glue would run down towards the stuck audio plug.

Just leave this in the phone until it dries.  I waited until the next morning to ensure that it was either really attached (or really destroyed).  Super glue doesn’t specifically create a strong bond with the metal but I suspect it was attaching itself to the plastic core.

Of course it worked.  Not because I am a certified technician.  If it didn’t work I probably wouldn’t be publishing this latest exploit – nobody wants to advertise personal failures.

Now the phone once again works, and my lego toy “Steve” has his own lightsaber. 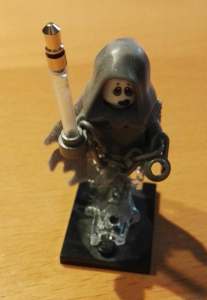 However, everything else being equal I would not want to be building toy light saber’s in this way on my day off.

A bit more theory about the problem

This entry was posted in DIY. Bookmark the permalink.